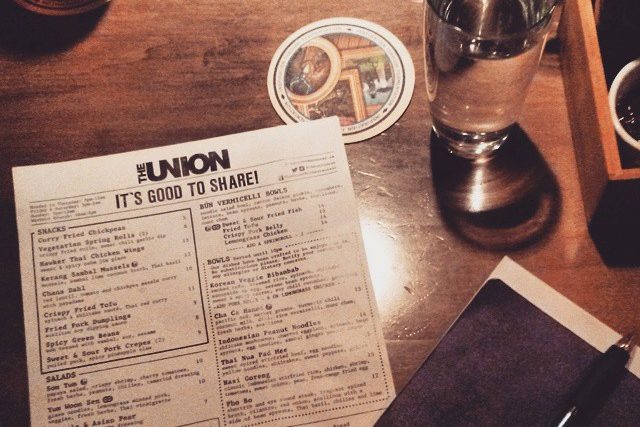 My senses perked up the minute I walk into the UNION – the dim lighting, the vibrant trendiness of this semi-hidden joint boasting in their creative flare on Southeast Asian cuisine. I must admit, coming from a family who runs an authentic Chinese restaurant business, I was a little skeptical of any restaurant that tries to replicate Asian cuisine.

Long picnic table style reclaimed wood benches filled the restaurant and created a cozy friendly atmosphere, as strangers shared a bench with each other, separated by an the expected awkward gap. It reminded me of those high school cafeteria days minus the awful stark white florescent lighting of sterile uniformity of our school system. The use of polished wood as the primary structural design of the place fits right in to the definition of a typical casual hip Main St. Vancouver food joint.

We ordered from the standard menu. I noticed the “$10 Banh Mi & A Pint” special and decided to give it a try.
First off was the Channa Dahl with pappadams. The presentation was nothing special but looking at the thin sheets of crispy pappadams lying there next to the dish of chunky thick dahl, I was quite a little fearful the fragile crackers cannot hold up the weight. Hungry like little monsters, we all reached over for a piece of the thin sheets and attempted to scoop up the flavor booster. “Snap…. Snap!” Like we predicted, the cracker failed to hold its form and disastrously broke into pieces, sinking itself inside the dahl. The more we played with it in attempt to fish it out, the more it broke apart. Well, at least the taste was good. I had no complaints. The pappadam was seasoned quite nicely highlighting the flavors of chickpea, while the dahl adds a good punch of spiciness and saltiness to stimulate appetite.

Excited for the unique addition of Sriracha aioli, I carefully grabbed the crunched up parchment enclosing the sandwich in my hand, and took a generous bite piercing my teeth through the subtle sweet toasty bread. Welcomed by the crackling sound of paper and crispy crust, the flavors of tanginess and saltiness melted in harmony. The refreshing crunchy crisp of marinated radish, carrots and cucumbers gave a slightly tangy sour taste. Warm tender barbeque chicken strips caramelized with faint lemongrass spices. Finally, the underwhelming Sriracha aioli coats the roof of my mouth in a disappointing resemblance of tasteless mayonnaise. I would say this dish is lacking a punch of flavor. Every ingredient could have been turned up a notch, and the only strong flavor that stood out was the infamous cilantro.

As for dessert, I’d like to comment on the Coconut milk mango panna cotta. I would rename this as “coconut milk jello” as it was too watery and missing the thick and creamy mouthfeel of a real panna cotta.

To conclude, I think this restaurant has a decent menu with fairly low pricing, with entrees ranging from $10-15. It’s a good choice for a casual spot to relax with friends on a weeknight after a long day of work.

The menu resembles a newsprint 1 pager – simple and to the point, with the main ingredients listed for each menu item.

Ambience: lively and trendy for young cultured professionals and non-cultured individuals alike.
Recommend: Overall, I have the impression that the menu lacks a balance in flavor and technique. It has a good value for money, and is on the right track with creativity, but the chef could do with a little fine-tuning with flavor boldness in the right places. ***